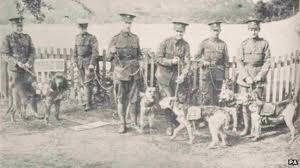 As far as the history of dog training goes, During the Great Depression, dog training began to grow in national popularity. At this time, food was scarce for humans, much less dogs, so trainers did not use edible treats to reward a dog for good behavior. Instead, good behaviors were rewarded with praise and undesirable behaviors were corrected with a small punishment, such as a quick jerk on a choke chain. This would condition the dog to avoid performing behaviors that cause pain. 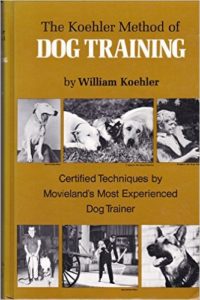 One  cannot talk about the history of dog training without mentioning William Kohler. The most popular pioneer in this dog training method was William Koehler, author of the best-selling dog obedience book The Koehler Method of Dog Training from 1962 – 1982. Koehler believed that training was a battle of wills and that it was harmful to dogs to allow them to go without correction for bad behaviors. While Koehler was a great trainer (you may have seen some of his four-legged students in Disney’s The Incredible Journey) he did not fully accept animal behavior theories. He assumed that dogs would understand why they were being punished and learn from it, as a rational person might. Anyone who has trained a dog knows that a dog does not learn behavior in the same way a human might, though they most certainly take cues from well-behaved owners.

Koehler’s influence  and his status in the history of dog training, remains very evident in some of the popular training methods of today, especially those that insist that dogs have a pack mentality and are always involved in a conspiracy to take dominance from the humans. Here is an example of how this mentality is way of misunderstanding a dog: if your dog pulls you along on walks and you never take the time to teach him to walk with you, it is not the dog’s fault for being dominant. He likely has a desire to see and smell the world around him and does not understand that he must walk along with you
rather than do as he pleases. This is not because he thinks he controls you, but by not setting rules and boundaries for the way your dog interacts with the world while on a leash, you effectively teach him that it is okay to pull you along. You do end up following him when he pulls you, so he is assured that you will be there with him while he does whatever he wants. What the dog really needs is to be trained to walk nicely because it is expected of him and in his best interests, and he will not learn that on his own. 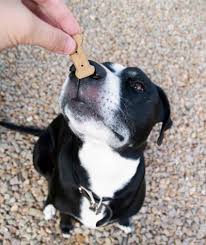 The generation that came after Koehler,  and earlier history of dog training,  in the 1980s championed a more positive dog training style that focused on rewarding good behavior with food or toys rather than correcting mistakes. One of the founders of this movement, veterinarian Ian Dunbar, started the then-unusual practice of puppy socialization, off-leash training and the lavish use of treats for rewards. Total Positive Reinforcement remains popular today, but unfortunately is unreliable when used alone and without any negative reinforcement whatsoever. This approach is fairly laissez-faire (hands-off) because it requires you to literally wait for the dog to decide on its own to behave in the desired way without any guidance from you. For example, if you tell your untrained dog to “sit” using only positive reinforcement, you must literally wait for him to decide to sit and then lavishly praise him when he does. He does deserve a reward for sitting, but if he does not understand what the command means to begin with, then you have not taught him anything. By the time he sits down, he has forgotten the cue “sit” altogether, and perceives that you are randomly giving him a treat. Not only does it take a long time for the dog to do what he is told, but he also may get frustrated when he does not have a clear expectation of what you want. Appropriate negative reinforcement would help in this case by allowing you to say the command “sit” at the same time as you push the dog’s rear end onto the ground. Once the dog sits, you can remove your hand from his behind and reward him with praise or a treat. Repetition of this activity allows the dog to connect the word “sit” with the physical act of sitting.

Attempting to use a clicker and treats to train a dog is only effective in very controlled environments. Your dog may be motivated to sit and stay for a treat while in his own home, but the second you have him sit and stay in an uncontrolled environment and he sees something more interesting, his desire to interact with that distraction (chasing a cat, wrestling with another
dog, stealing a child’s ice cream, etc.) is going to be much stronger than his desire to have a treat. The fact that you have a polite dog at home means absolutely nothing when his behavior is out of your control where it matters: in public. 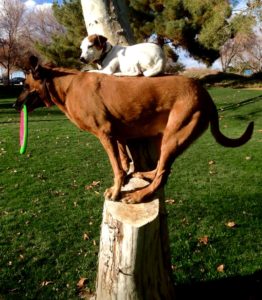 No matter what the history of dog training shows us, it is true today that Negative Reinforcement, when used in conjunction with positive reinforcement does not mean pain, punishment or harsh corrections. Instead, in the Balanced Dog Training method, used at Phoenix Dog Training, negative reinforcement is a way to show the dog what it needs to do. For example, when you train a horse to turn to the left when the left rein is pulled, you are essentially using the annoying sensation of the bit in the horse’s mouth to show the horse what you want it to do. The horse reacts to alleviate the annoyance of the bit. Conversely, if you respond to undesirable behaviors by giving in to them, you only allow your dog to control you. Compare this to the analogy of a child throwing a tantrum in a store after his mother does not buy him a candy bar. If the mother gives in after his tantrum and gets the kid some candy, the child realizes that he has just taught his mother a new trick. He now assumes he can always have his way by throwing a tantrum. This same principle applies with dogs.

Phoenix Dog Training is able train dogs quickly and effectively because we take the time to understand why your dog acts out and work to motivate a total behavior change both in you as the owner and in your dog. Our Balanced Dog Training approach and method combines all aspects of learning theory and is constantly improving. As our knowledge grows, our toolbox of dog training tools expands, allowing us to find the right fit for each unique animal we meet. We also give you the tools you need to be the kind of owner your dog needs and provide him with the structure and attention he needs to continue to behave as he should with our lifetime guarantee.

For more information on Phoenix Dog Training and our training methods or to learn more about dog training from Harvard Educated Dog Behaviorist, call (602) 769-1411 today.