When is comes to experience, especially with difficult to manage dogs, you will not find a more experienced team of dog training professionals than that of  Phoenix Dog Training. The Phoenix Dog Training team consists of Steve, our Trainer and Senior Behavior Specialist, Phil, our Head Trainer and Senior Behavior Specialist, and our Dog Behaviorist.  Together the three of us have over 114 years of combined experience in training and rehabilitating dogs. You will not find another set of Dog Training Professionals in Arizona with the amount of experience that we have. 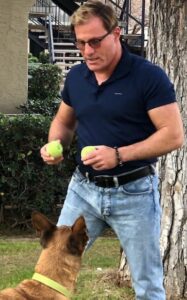 Will Bangura is a Veteran Dog Behaviorist with decades of experience treating some of the most severe behavior problems in dogs. Will is also the President and Founder of Phoenix Dog Training. Will is also the host of the weekly radio show, Pet Talk Today on 1100 KFNX AM Radio Saturdays from 9AM to 10AM. You can also listen to his weekly radio show as a podcast here on our website.

Will has been “Dancing with Dogs,” since 1976, for over 44 years. He has been an expert witness in dog aggression cases, and an often called upon dog behavior expert for local and national news outlets. Will is also a Veteran of service in the United States Army.

At the young age of 10, Will was competing, showing and titling dogs in AKC Dog Obedience Matches as a Junior Handler. Will has been training dogs with behavior problems professionally for almost 30 years. Will’s Formal education rests in both Undergraduate and Graduate Work in Psychology, Biology and other Behavior Science Disciplines. In 2011 he completed postgraduate study and coursework thru Harvard University in Canine Cognition.

Will Specializes in the most difficult of Dog Behavior Problems, Extreme Dog Aggression and Severe Anxiety Disorders in dogs, Ritualistic and Obsessive-Compulsive dog behavior. 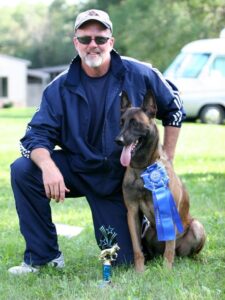 Phil Behun has been involved with professional Dog Training for close to 40 years.  Starting with his first Dobermann at the age of 25, Phil has been involved with many aspects of Dog Training from Basic Pet Obedience to Competitive Sport Training and intense Police K9 Work.  His experiences have taken him all over the United States and abroad while competing at Local, Regional, National and World Championship Events in several areas of Dog Training Competition.  Whether on the field competing with his own dogs or Coaching others to enjoy the thrills of Dog Sport, Phil is very passionate about his love for animals and it shows in the care he takes with every dog training client and dog owner whether gearing up for competition or helping our furry friends become better behaved members of the Family.

Phil is a Veteran of service in the United States Marine Corps, former Board Member of the Illini Dobermann Pinscher Club, Founding Member and Vice President of the Windy City Ring Club, former Director of Training for the Greater Chicago Schutzhund Club and Owner Operator of The Dog Training Center in Arlington Heights Illinois and Owner Operator of Oak Spring Kennels and von der Eichenquelle Belgian Malinois a 40 acre Kennel facility in Poplar Grove Illinois. 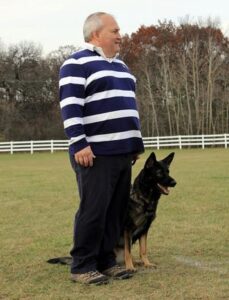 Steve Zorn has been involved with dog training for more than 20 years. Steve has always had a passion for animals from a very early age. He sensed a special bond with animals from childhood with the family dog and the many other animals he encountered on family and friends’ farms. His lifelong thirst for knowledge pertaining to animals and animal behavior is insatiable.

Since his early 30’s Steve has been involved in rescue work, where he co-founded and ran an animal rescue for 16 years. In this time Steve rescued, rehabbed, trained, and found permanent homes for well over 1000 dogs. Many of these were rare breeds, or, breeds deemed dangerous. He quickly became the go to guy for many abused, neglected, and homeless dogs that ended up in shelters and county pounds in the Midwest. Steve’s passion has always been with the animals that were ignored or deemed too difficult to bother with. He counts these as his greatest successes. Steve has also been a mentor to other animal rescue organizations offering advice of training, behavior, and, management of dogs and cats.

Steve also ran his own dog training business in the Chicagoland area, and, then again in Nashville. While in Nashville Steve also worked with one of the inventors of the very difficult Vapor Wake Training Method for Explosives Detection Dogs.

Presently, Steve still enjoys training and competing with his German Shepherds and has more recently added dock diving to the list. His passion also remains with rare breeds of dogs, as well as, Livestock Guard Dogs utilized on farms.

Steve’s best advice to all dog owners is to build a strong bond with your dogs based on mutual trust, and, learn how to understand what your dog is thinking, especially in difficult or stressful situations. 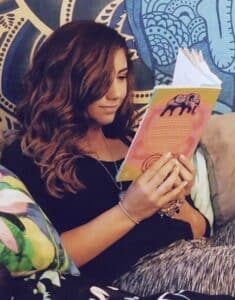 Brittany helps with our office phone and email inquiries, responding to customers needs, and works as a liaison between training staff and customers. Brittany is also a frequent co-host on Pet Talk Today, our Weekly Radio Call-In Show.

Brittany also works as a legal assistant, is a trained life coach, and is currently pursuing and continuing her education in diet, nutrition, herbalism, reflexology, and eastern body work and healing arts.