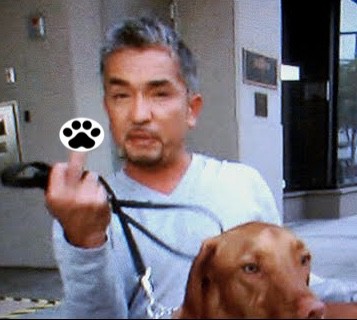 Are Dog Trainers Like Cesar Millan, The Dog Whisperer Correct? 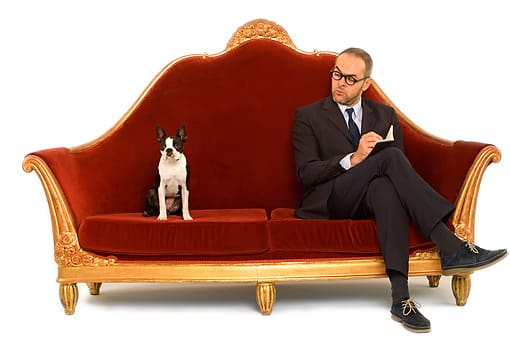 Dogs are Opportunists, not Dominant. As a result, much of what is spoken about dogs and dominance in the world of dog training is false. Firstly, as an Applied Animal Behaviorist who did his Post Graduate Education at Harvard University in Canine Cognition, I feel pretty certain that I do actually know a thing or two about animal and more specifically dog behavior.

Therefore, one of the biggest misconceptions in the dog training world is one told by most all dog trainers. Therefore, the myth is this. “Dogs are dominant.”  “Your dominant dog is trying to be Alpha over you.” You need to show your dog who’s boss.”  That is neanderthal speak for carry a big stick.

I am amazed in 2019 that I still hear this on almost a daily basis. I find myself fighting an industry of dog trainers who are not regulated in any way, and an industry that has no standards and no education requirements to work with dogs training obedience and modifying behavior problems in dogs.

Turning the television dial and watching the news, I see and hear about the dumbing down of America, science deniers, and alternative facts, and I wonder is there any hope for progress in the dog training industry to bring about science based information and science based obedience and behavior training for pet dogs. 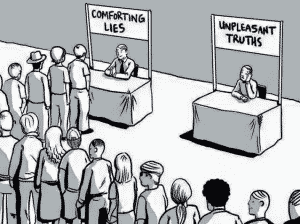 Americans love their dogs and pets almost more than they love their children.  Pets make up a $63 billion dollar a year retail industry, one that continues to grow in double digits even in times of recession. I have seen first hand dog owners willing to pay out more money on doggy daycare than what they are willing to pay for childcare. This being the case, why do they believe the dog dominance myth? Why do they shortchange their dogs when it comes to dog training? Why wouldn’t  they want the best training they could have for their dogs? 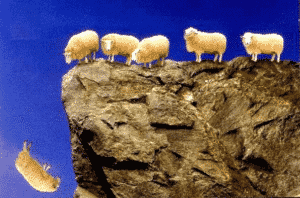 Have we become a society of followers to the point that we believe anything we read or here?  Is it just the majority of un educated and ignorant dog trainers and those sitting behind the desk at 1600 Pennsylvania Avenue who have the biggest bark and cary the biggest stick that are able to get the attention of most Americans who suffer in one way or another from ADHD and get their facts from 60 second sound bites from 24/7 sensational cable news networks?   Not that it would matter to these populations of peoples, but here are the real facts not the alternative facts.

First of all when it comes to the idea of dogs being dominant, there is a plethora of research and science that has debunked the dog dominance myth for years. In fact the main researcher who initially published the idea that dogs were dominant has retracted his work and stated that his research was wrong and flawed.  He states clearly, dogs are not a dominant species   Dr David Mech was the one who first touted these fallacies. However, Mech has the decency to admit when he is wrong.  Let me be real clear here; Domesticated dogs are not wolves,  Domesticated dogs don’t have strong hierarchy and structure systems.  Domesticated dogs don’t fight off predators, don’t hunt prey, don’t fight fo a sexual mate.

However, domesticated dogs do, like any two year old child without a developed frontal cortex, act selfishly and act on impulse. Consequently, they will take any resource they can get away with, and not think twice about it.  They not dominant but opportunists.  They will take whatever they can get.  Domesticated dogs are not dominant but are unruly dogs being dogs.  What makes a dog better behaved are rules.  You want to make an unruly dog behaved, train and enforce rules. 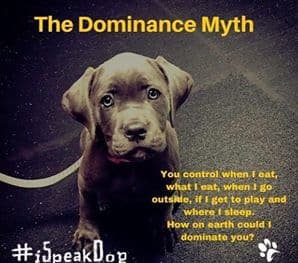 The fact that dog owners feed their dogs automatically would make them, the owner
dominant no matter what above all else.  There is no need to punch the dog in the shoulder making silly “Chit!” sounds, or pinning dogs on their backs. Then there is the term alpha.  For some reason the term alpha in dogs has become a synonym for bad ass or jerk.  Alpha in its real sense of the term, when discussing canines means the breeding pair. 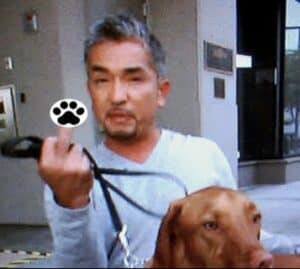 There is a alpha female and an alpha male.  But here too, this has been mythologized to mean some kind of bully or  punk female bitch or dog.  Why don’t more dog trainers recognize or teach this to their clients? Is it perhaps just easier to blame the dog and have a scapegoat? Is is because if there is a modern day industrial culture that is addicted to dominance and violence its the American culture itself, or is the dominance myth just an inconvenient truth?

We Train What We Believe

Why do I bring this up?  it’s because how we view dogs that ultimately determines how we treat and train dogs.  It does not help that there are charismatic TV trainers who too have no education and training that are the poster child for dog training and the adored superhero for uneducated dog trainers around the country. 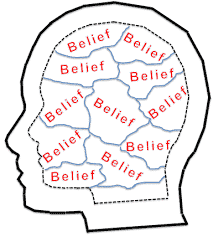 As a result, we have dog owners and uneducated dog trainers emulating barbaric dominance based, punishment based training styles and being patted on the back and praised like a dog for following the likes of a undocumented dog groomer gone bad to charismatic tv star trainer, thanks to Will and Jada Pinkett Smith who fell under the spell of this charismatic and charming bullshit artist formally know as Cesar. 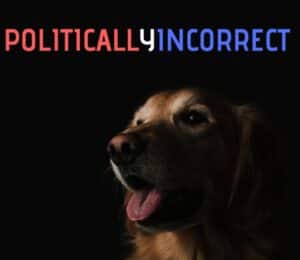 The one thing I have learned from the opposition of the dog dominance myth is that
it doesn’t pay to be politically correct.  People don’t listen to politically correct.  Similarly, they don’t listen  to logic, reason, and critical thinking. People act on impulse and have little to no tolerance for frustration.  As result, they have little to no impulse control.  Is it possible that we don’t just love our dogs, but we have become just like them instead?